This State Park is one of the best places near Kona to get away to an uncrowded and beautiful sandy beach.

The land that is now the State Park was once privately owned by a family whose abandoned house still stands at the northern end of the beach. The land was sold to a Japanese investor who had plans to develop the area. The state denied him permission for the development of the area and the land was sold back to the state, who turned it into a State Park. Maybe a disappointment for his investors, but things couldn't have worked out better for the rest of us. Now instead of yet another exclusive hotel, we have a quiet beach that's off the beaten path but not that hard to access. 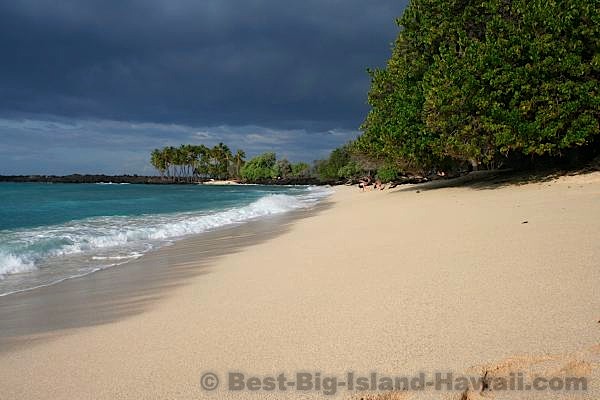 The best beach at here is called Mahai'ula (Lots of places on the Big Island have more than one name. This area used to be called Kona Coast before it was a State Park... Kekaha Kai or Mahai'ula or Kona Coast... Just call it whatever you like and enjoy!) This beach is accessible via a 1.5 mile semi-paved road that heads towards the ocean from Highway 19 between mile markers 90 and 91. The road is rough in some places but just about any car can handle it if you take your time. As you get near the ocean shore, you'll see an area with a gate and a path on the North side of the road (your right). This is the best access to the beach. Park on either side of the road in the area around this gate.

To access the beach itself, walk north from the parking area, through the gate and along the path. After about 5-10 minutes, you'll get to a large group of trees. The beach is immediately behind these trees. To get to the South end of the beach just cut through the slight clearing where the path first approaches the trees. To get to the North end of the beach, just keep walking along the path and it leads right to the beach.

Mahai'ula beach at Kekaha Kai is long and sandy with plenty of shade at the back of the beach along the trees. The beach is also fairly steep and the water gets deep quite quickly. Be very attentive of children playing at this beach, especially when there are waves. Larger waves will wash right up the beach and can easily pull a child in over their head very quickly. 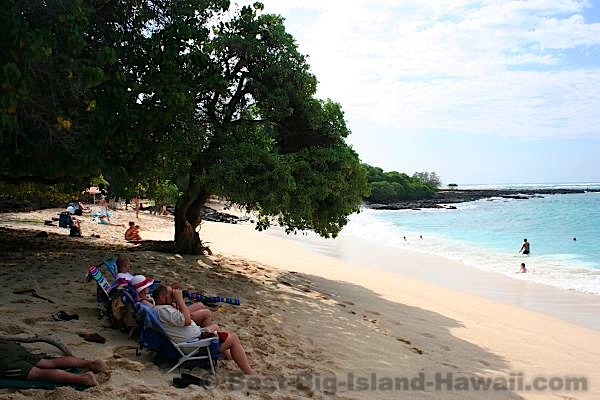 The only thing that will remind you that you're not on your own deserted Island is the occasional plane that flies overhead on it's way to landing at the Kona Airport. If you can handle these fly-overs once in a while, Kekaha Kai is the perfect place to get away from the crowds and enjoy a beautiful beach day just a short drive from Kailua-Kona.


Kekaha Kai at a Glance:

Accessibility: Access via a sometimes rough, semi-paved road. The gate is open from 9 AM until 8 PM but closed on Wednesdays.

Parking: Parking on either side of the end of the road near the gate and path.

Activities: Swimming, Surfing (at the point, not on the beach), Strolling

My Favorites Here: Reading in the shade under the trees.

Watch Out For: The occasional wave that washes all the way up the beach.

[Return to the top of this page]


Go back from Kekaha Kai Beach
to Big Island Beaches